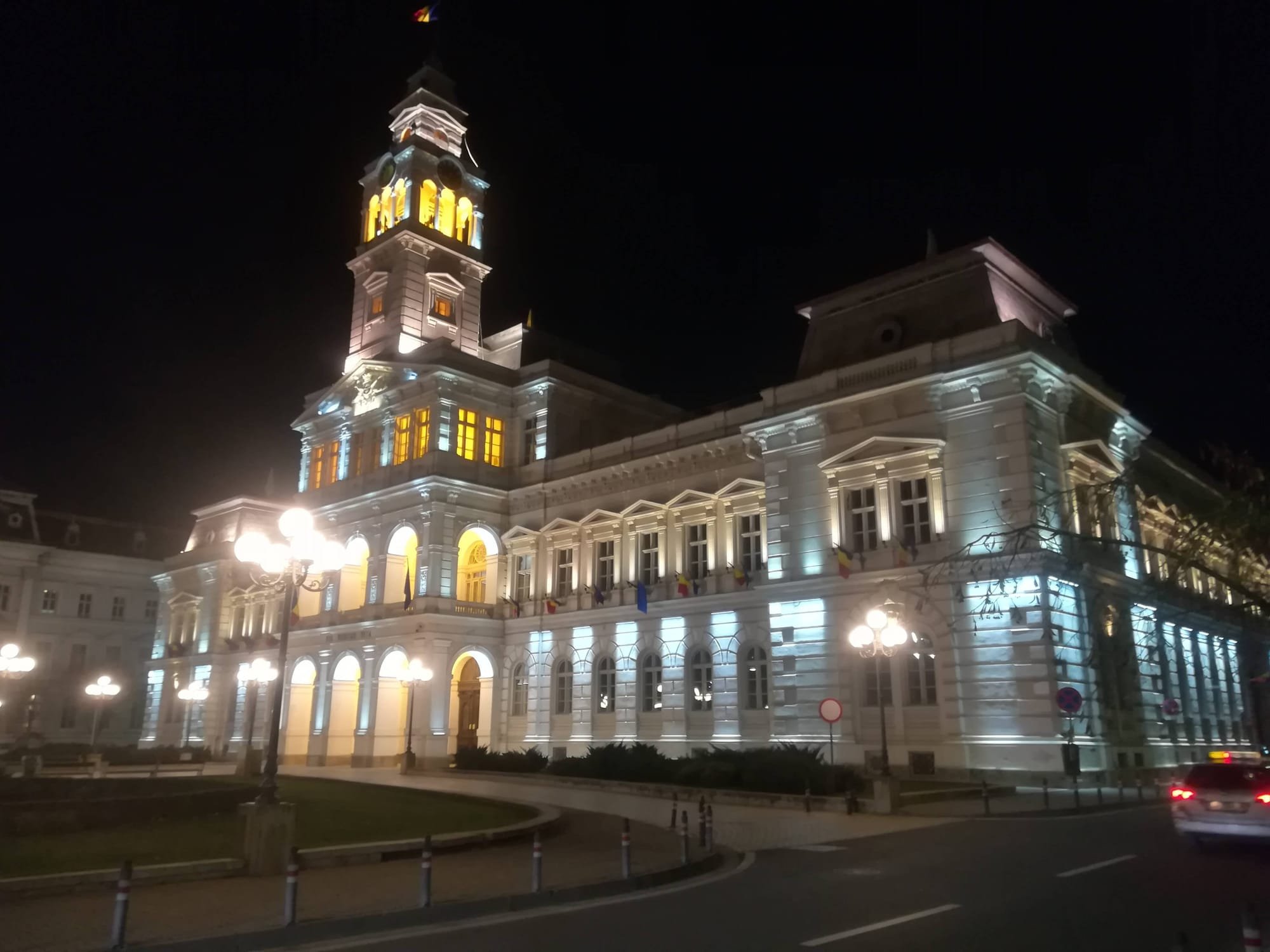 Considered one of the most important economical, social and cultural centers of the country, the city of Arad benefits from the chance of being placed at the crossroad of certain major communication roads. Settled along the Mureş River, it offers the visitor unforgettable images, due to its architectural patrimony, including the baroque, eclectic and neo-gothic styles, harmoniously blended with the Renaissance and Secession ones. One of the most important and imposing public buildings of the city, the City Hall, or, as the locals call it, the Mayorship (City Hall), was built between 1872 and 1877. 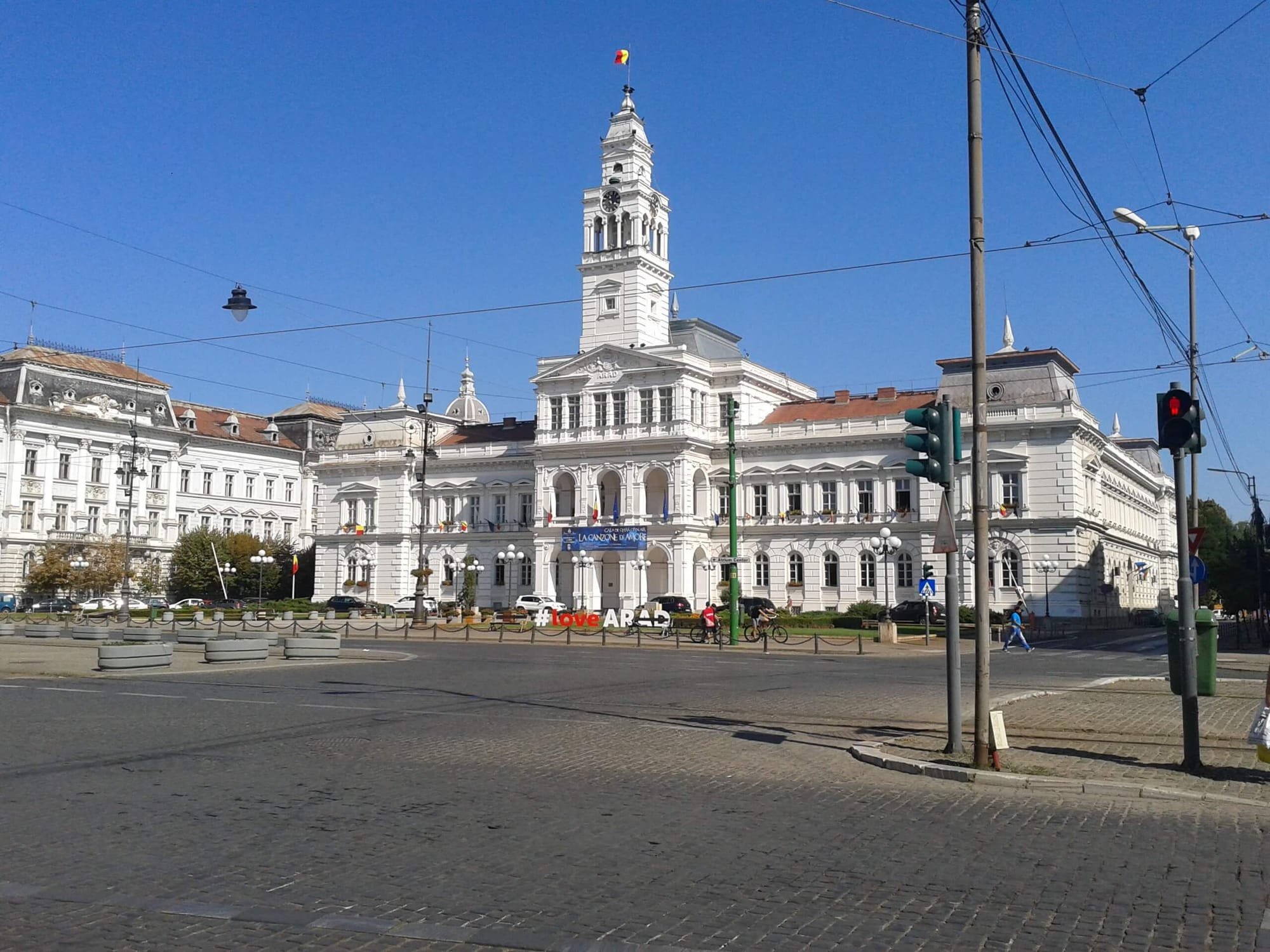 Throughout the history of Arad, the building had three predecessors.

During the 17th century, both the „German City" (21 streets, 380 houses), situated in the northern part of the city, and inhabited by craftsmen, and the „Serbian City”, in the southern part (11 streets, 157 de houses), inhabited by Serbian border guards and their families, had their own separate city hall, although the whole population didn't exceed 6.000 inhabitants.

Both were modest buildings, which didn't survive, mostly because of the impetuous urban development.

Arad started to develop as a Western city in the first decades of the 18th century, when raising a city hall for the entire population became an imperious necessity. The third city hall was inaugurated in 1770; it was situated on the main street, being a modest building in the provincial baroque style, with a ground floor and an upper floor to which a clock tower was later added. This building served as a city hall for 110 years. The most important historical event it hosted is the last reunion of the Hungarian revolutionary government, led by Kossuth Lajos on the 11th of August 1849. It was demolished in 1880.

Instead, a building known as the 'Domány Palace' (Avram Iancu square, 16) was erected.

Building a new city hall, fit for a developing city, which had acquired the title of Free Royal City in 1834, was debated well before the 1848 revolution. Nevertheless, the decision was voted by the local councilors only in 1872. Simultaneously, the decision of also building a new, modern theater was adopted, because the old building (erected in 1818), actually the oldest institution of its kind within the Carpathians, and still existing to this day, didn't meet the necessities any more.

A building of such size required a particular financial effort from the city, something that could not be achieved without a significant loan from a Vienna bank. 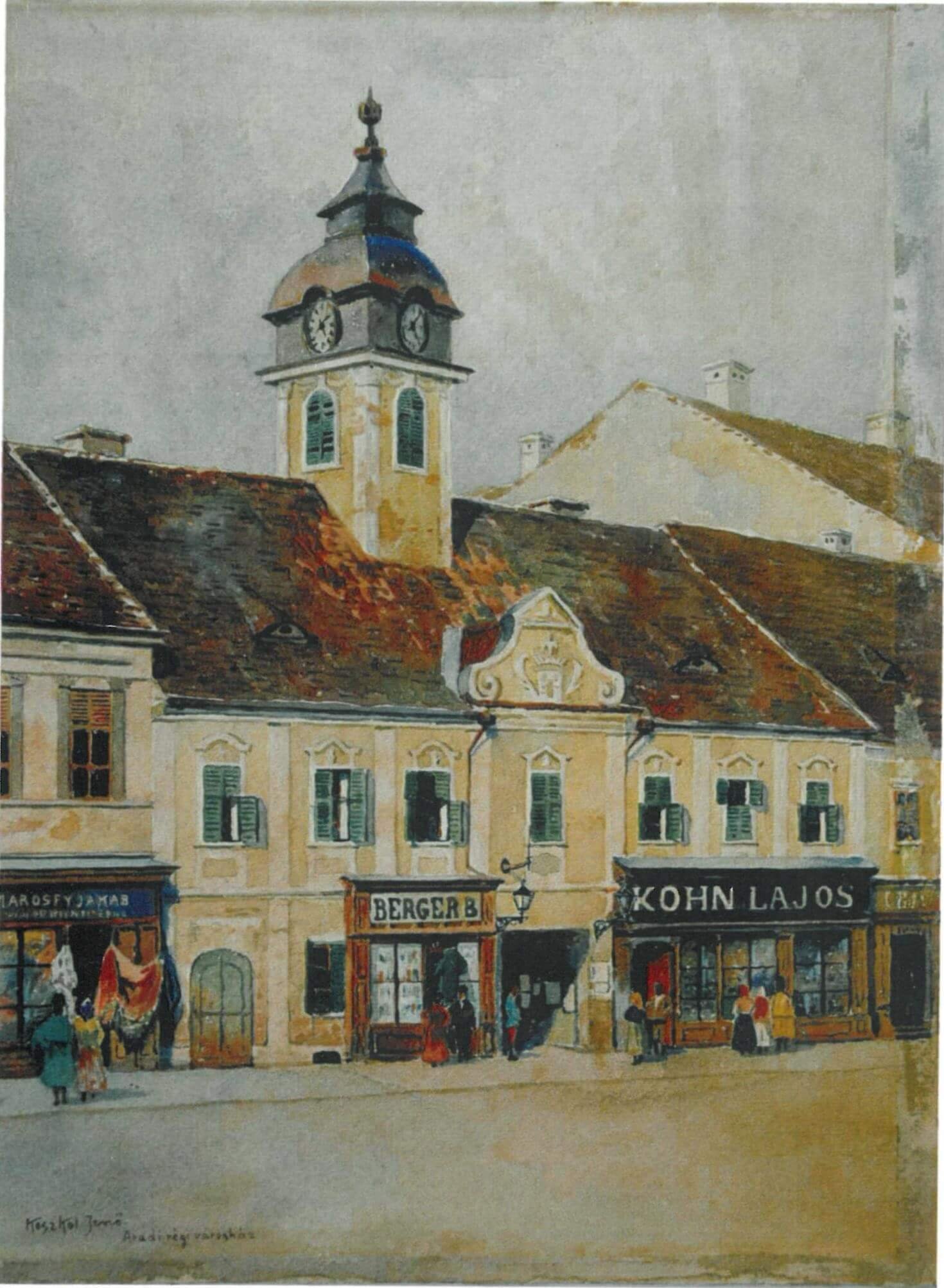 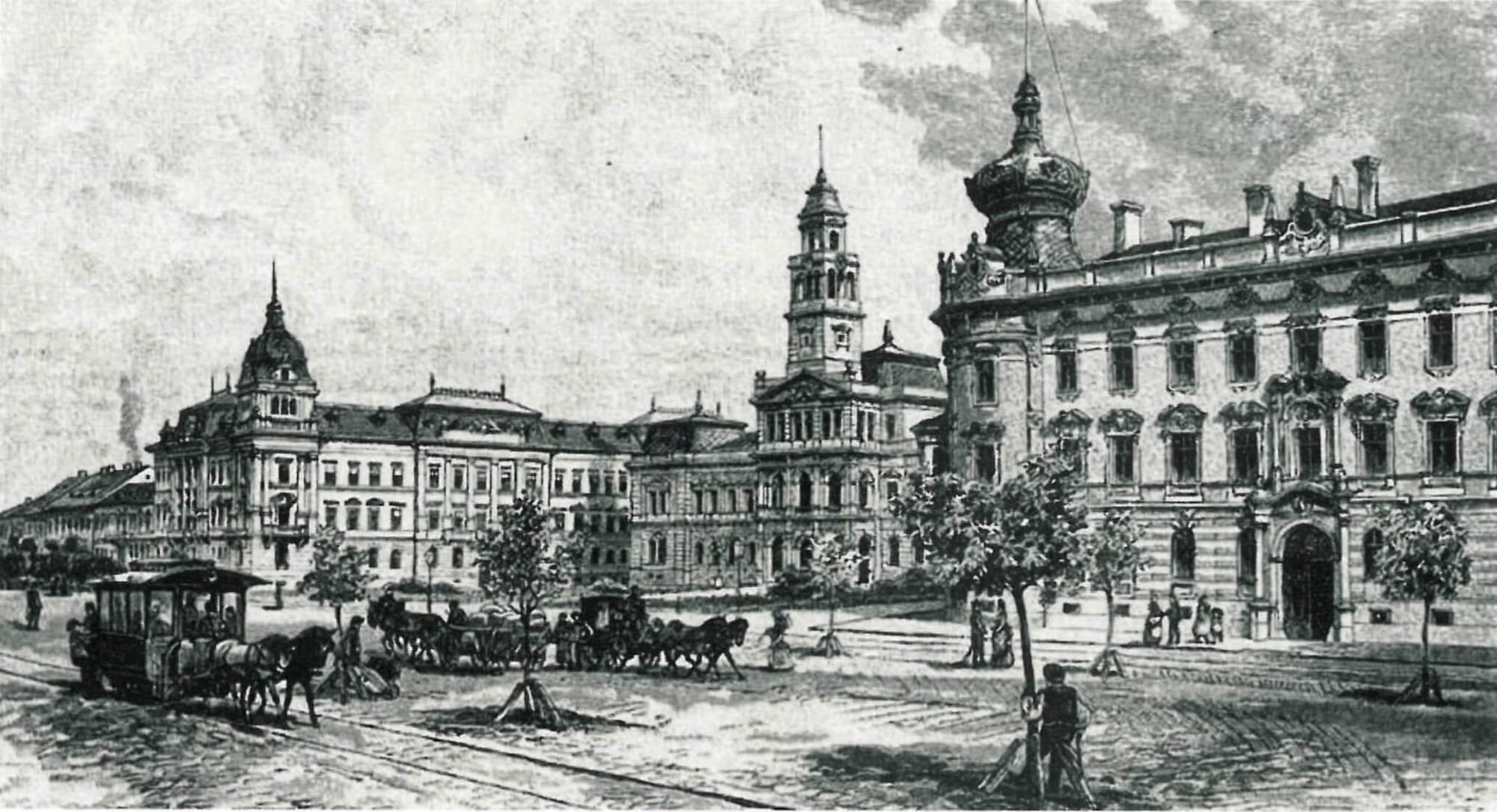 A public contest for the construction was initiated, and, eventually, out of 17 projects, the one approved was that of the young but famous Hungarian architect Lechner Ödön (1845-1914). His view was that the best place for the building would be the upper part of the main street, next to the bank of Mureş, on the site of the old salt deposit.

The deposit was demolished, the statue of Saint Nepomuk (the oldest baroque statue of Arad, from 1729), initially placed in this area, was moved to the intersection of Episcopiei and Desseanu streets (their name today), and the building site was organized.

While still working at the foundations it was clear that the building exceeded the financial possibilities of Arad. The building of the Royal High School (today's National College Moise Nicoară) was not yet finished, and building the new theatre involved working day and night.

These represented three grand simultaneous investments, in spite of a world economical crisis.

In order to find a viable solution, permission to simplify the project was asked from the Hungarian architect; negotiations lead nowhere.

Then, the Arad architect Pekár Ferenc, assigned with this highly difficult task, as well as with directing the building process, gave up the building wing directed to the Mureş, as well as at the second floor of the building, keeping it only for the central body, under the tower.

In 1874 the building was ready, being partly set in use the next year. Initially, it hosted 90 offices, a festive hall, and a smaller hall for meetings. Arad's mayor at that time was Atzél Péter.

The 54 meters high tower and the festive hall were inaugurated on January the 10th , 1877. On that occasion, the former mayor, Atzél Péter, in the meantime promoted to the high function of the county's prefect, delivered a speech saying, among others: "... this hall is an eloquent testimony for the spirit of sacrifice of this community. For years the erection of a theatre and an administrative palace to which we could look without feeling ashamed was desired. Today, gentlemen, we succeeded in what seemed impossible to achieve". 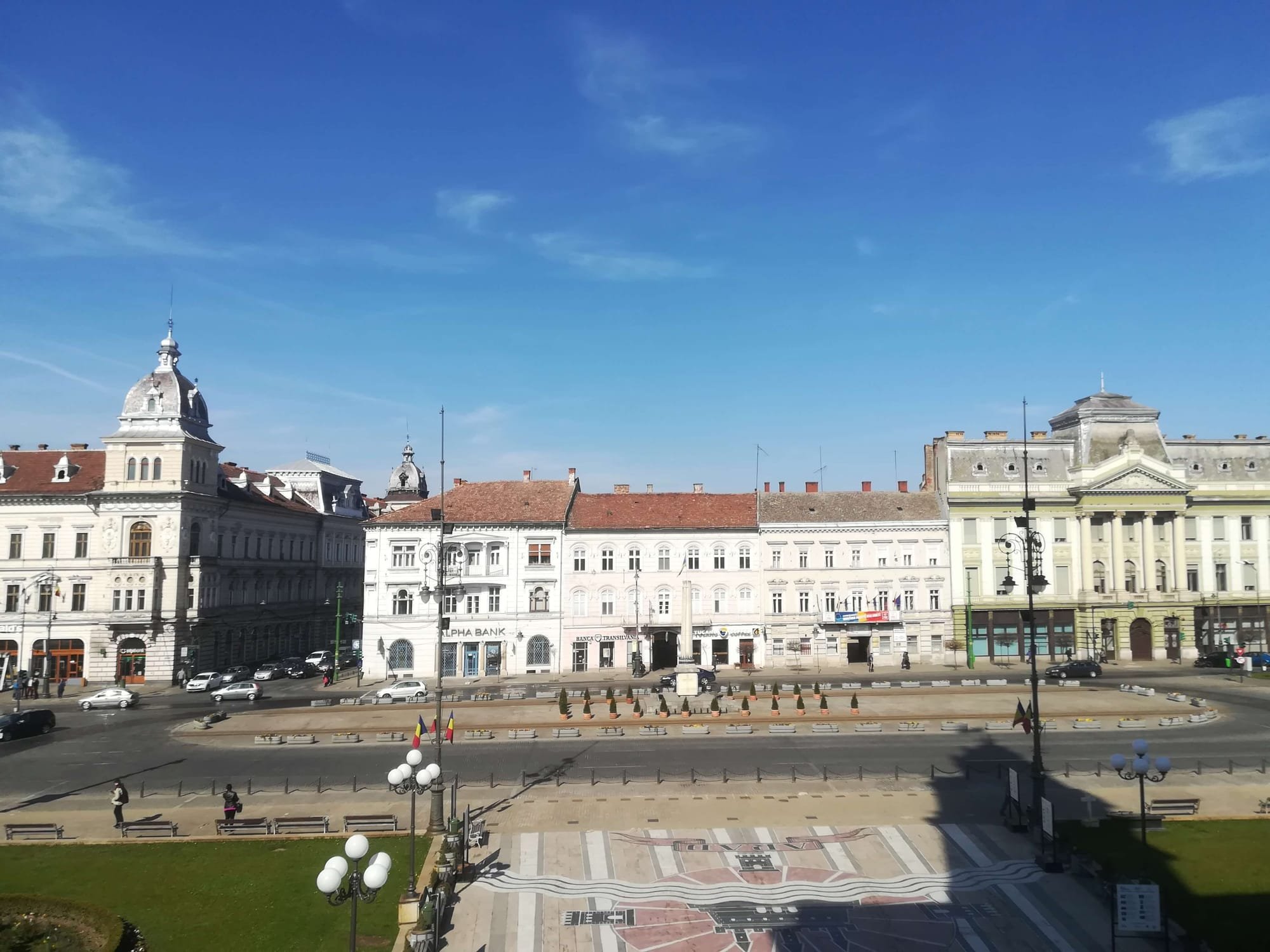 The first "high public official" of the new administrative building was the mayor Salacz Gyula, invested in office on March the 1st, 1876, and remaining in office (several times reelected) for 26 years, a real record, especially when taking into account the fact that, at that time, Arad became a modern western city in all respects. The statue of the most long-lived in office mayor who has guided his entire career according to the motto "the city's interest above all", was inaugurated on his 180th  birthday, on November 17th  , 2012, at the intersection of Ilarie Chendi and Alecsandri streets.

Returning to the administrative palace, the building is U-shaped, the three sides enclosing an inner yard. Access is granted through three massive gates, while the prismatic central tower evokes the Flemish city halls. The Swiss clock, installed in 1878, is still functional.

The most valuable architectural elements of the building are placed on the façade. Above the three massive pillars from the main entrance, there is a balcony, segmented by arcades along the festive hall. In the façade tympanum there is the Arad City crest.

Arad was among the first provincial towns which, taking advantage of the favorable circumstances at the beginning of the dualist, Austro-Hungarian rule, initiated the building of an administrative palace. Even if, due to the aforementioned economical unfavorable situation, Lechner's initial plan had undergone certain simplifying, the final building remained imposing, and became one of the city's iconic buildings.

Placed in the center of the boulevard, the whole building bears the stamp of the neo-Renaissance style. Flanked by other two imposing buildings, the Cenad Palace and the Treasury Palace, they form a coherent architectural ensemble. Integrated lighting highlights even more details at nighttime.

From the spacious hall at the main entrance, monumental marble stairs lead to the first floor. Here, one can admire a series of Murano stained glass windows, symbolizing the four seasons, designed by visual artist Sever Frenţiu.

On the first floor, next to the offices, there is the festive hall, with a balcony, intended to host local council meetings, as well as various official events, and a smaller meeting-room. The palace's festive hall (nowadays 'King Ferdinand' hall) is a masterwork. The original ornamentation, including the old municipal crest, was remade during the complex restoration between 2012 and 2014, a process including both the first floor festive hall, with outstanding plaster and wood insets, and the main entrance hall. On this occasion, next to the entrance hall was placed a huge oil portrait of King Ferdinand and Queen Maria, while inside one of King Ferdinand. 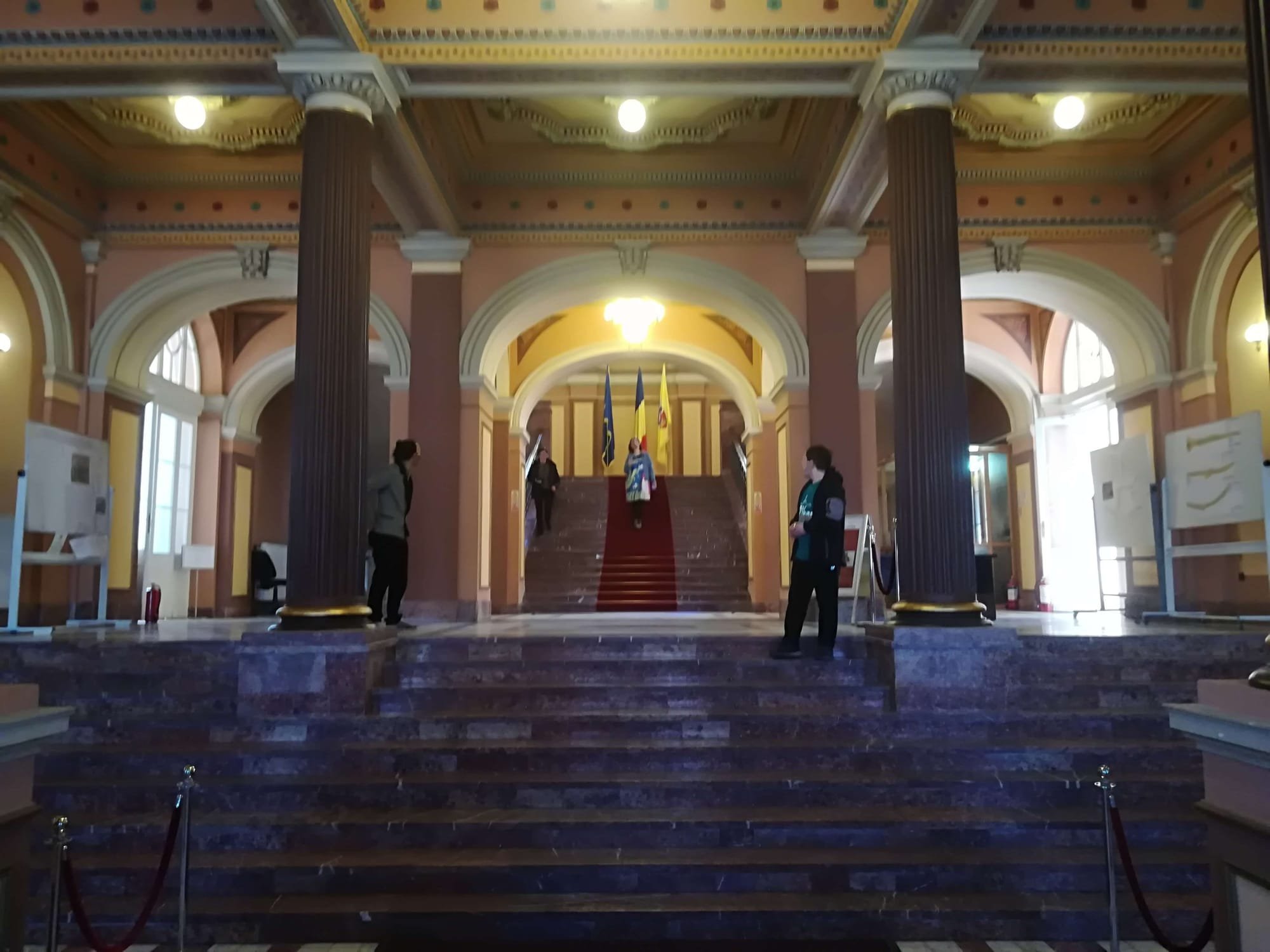 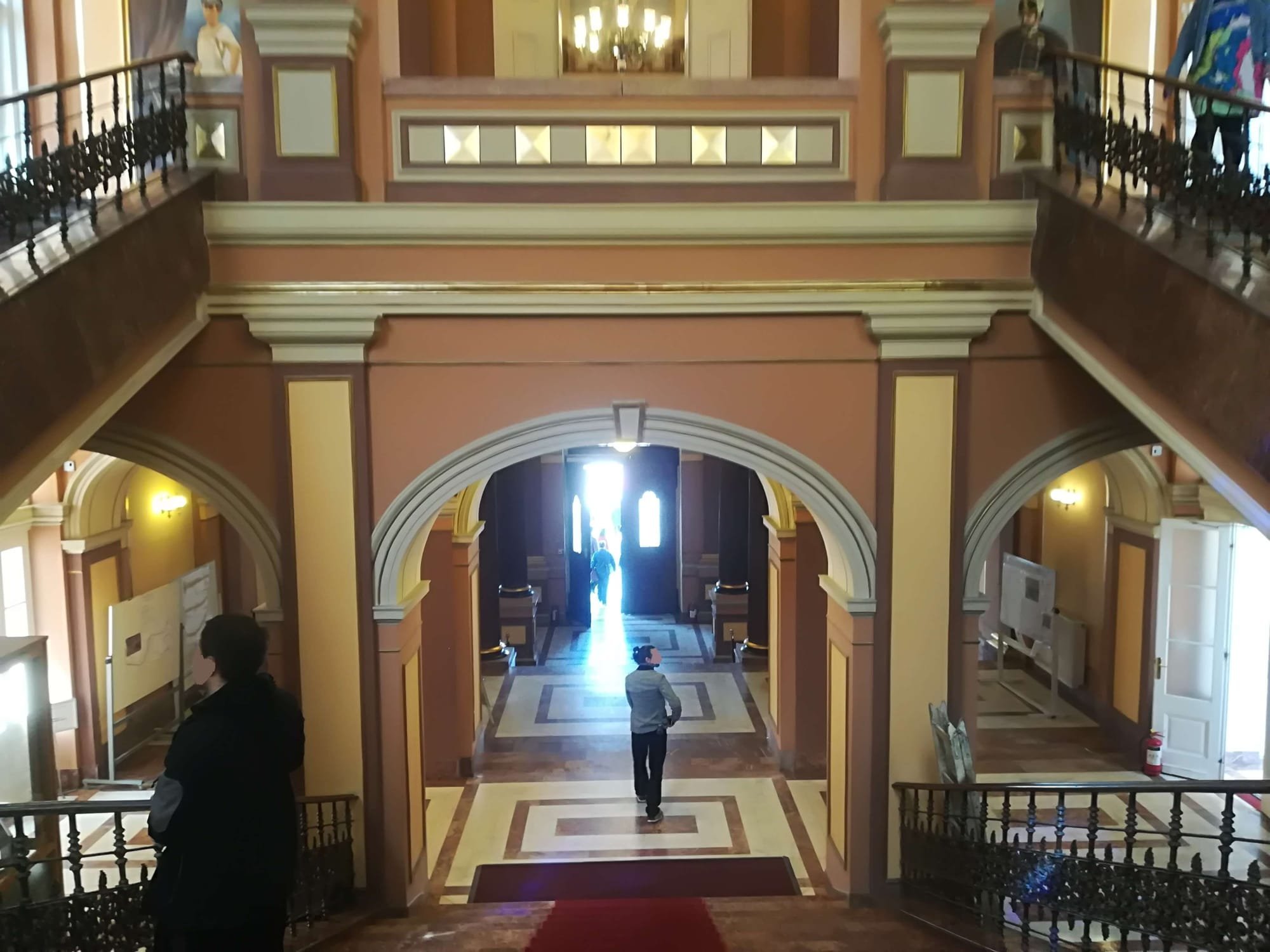 During its 145 years of existence, this imposing edifice was restored several times, without undergoing major modifications. The festive hall alone was restored four times. In the year 1988 - on the architect Miloş Cristea guidance - , the plateau in front of the building was set up, its mosaic representing the Arad municipality's crest.

Today, the administrative palace hosts the city hall and the county's prefecture.

During the 19th century, within the building, close to the mayor's office, there was a luxuriously set guest chamber. Important guests of the city, such as Emperor Franz Josepf (1884), world¬famous painter Munkácsy Mihály (1890), or novelist Jókai Mór (1890) were hosted here.

The tower also had an observation post with a bell, for fire alarm. In case of fire, the bell was rung and a flag signaled the direction of the incident.

Initially, there was a clock only on three sides of the tower, with one being installed on the side facing the river Mureş just later. For decades, one of the most esteemed Arad watchmakers was entrusted with the task of clock maintenance, this being considered a task of honor.

During the first decade of the 20th century, the people of Arad could admire a large family of peacocks inhabiting the inner yard of the city hall.

The entrance towards the Treasury building (today, 'Aurel Vlaicu' University) was walled in 1931 and reopened only after the complex renovations made in the 1970s.

The city hall building and the square in front of it evoke a series of important events in the life of the city. The great hall hosted, in the 1890s, the literary matinees of the 'Kölcsey' Cultural Association, and, in 1909-1910, the general assemblies of the Cultural Association of the Romanians from Arad, led by Vasile Goldiş.

It is here that the Romanian administration was installed, in May 1919. The first Romanian mayor elected was Ioan Robu (1919-1926), followed, until World War II, by Ştefan Anghel, Radu Cornel, Alexa Boţioc, Ioan Ursu and Romul Coţoiu.

The hall also hosts the portraits of the most important mayors of Arad.

During the 1929-1933 economical crisis, the square in front of the Administrative Palace witnessed a series of manifestations, among them, those of the unemployed in January¬February 1930, and December 1931.

On July 25th 1945, it was here that the 1st Romanian Army, returning from the anti¬Hitlerist front, had a triumphal reception.

A series of important people delivered speeches from the city hall balcony, on the occasion of their visits to Arad, from the general secretary of the Romanian Communist Party, Nicolae Ceauşescu, to King Michael I.

The great demonstration of the city's population for overthrowing the communist dictatorship in December 1989 took place on the plateau and in the square in front of the City Hall, Arad being the second city, after Timişoara, in which the revolution sparked. It is here that the first shots were fired, taking the life of several young revolutionaries. In remembrance to these, the main boulevard now bears the name of Bulevardul Revoluţiei (the Revolution Boulevard), and the plateau that of Revolution Square. Also here, on the lawn next to the plateau, the Martyrs' Cross was erected and in 1999, on the space between the City Hall and the National Bank, the 1989 Revolution Obelisk, an artificial stone work by sculptor Ştefan Călărăşan.

Even nowadays, the square in front of the City Hall hosts various public events: Christmas and Easter fares, concerts, open-air exhibitions, sports events (the Arad Rally, the finish line and the start line of the Arad-Békéscsaba Supermaraton) etc. 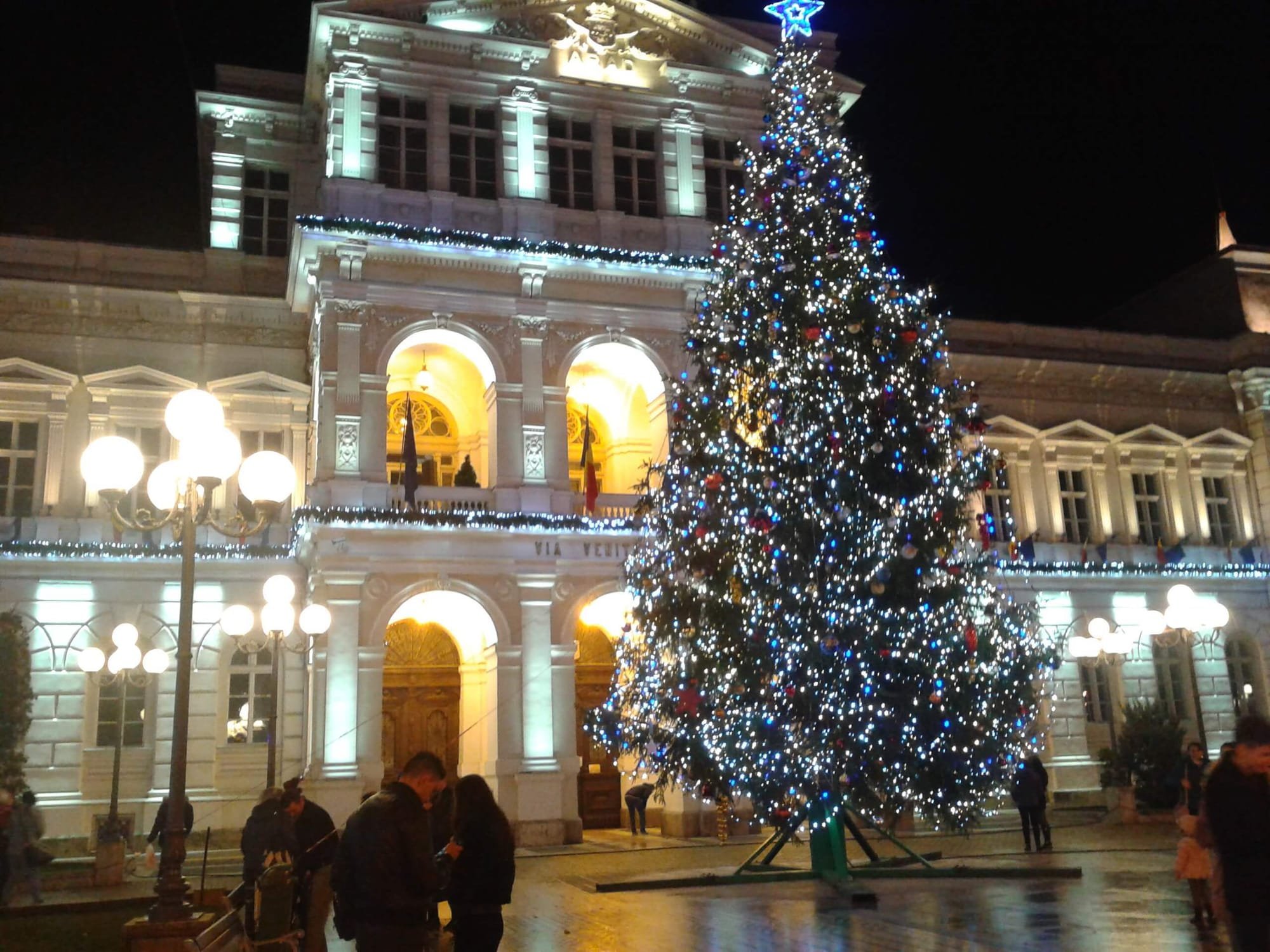 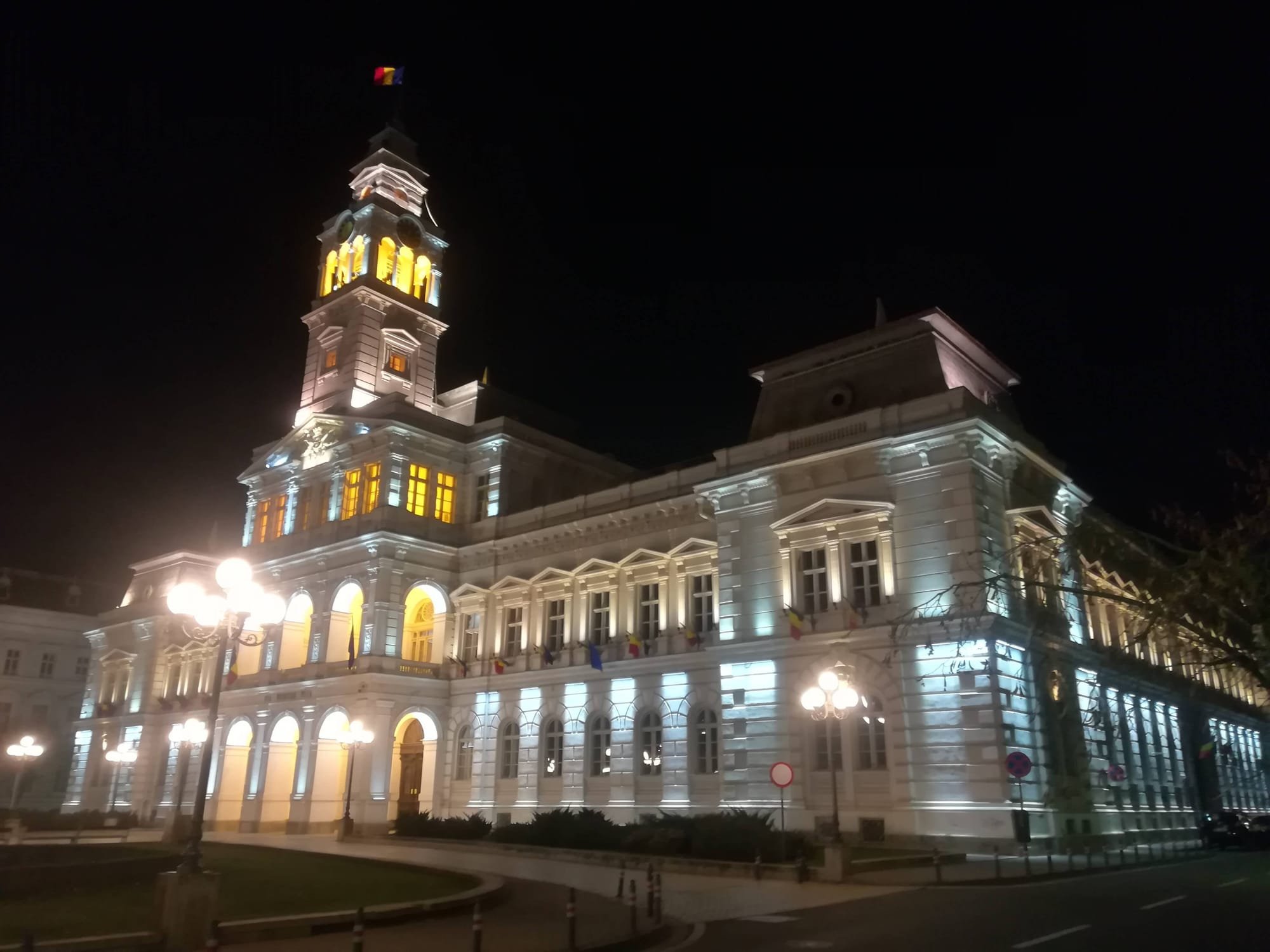